I’m an official finisher of the Chicago Marathon! 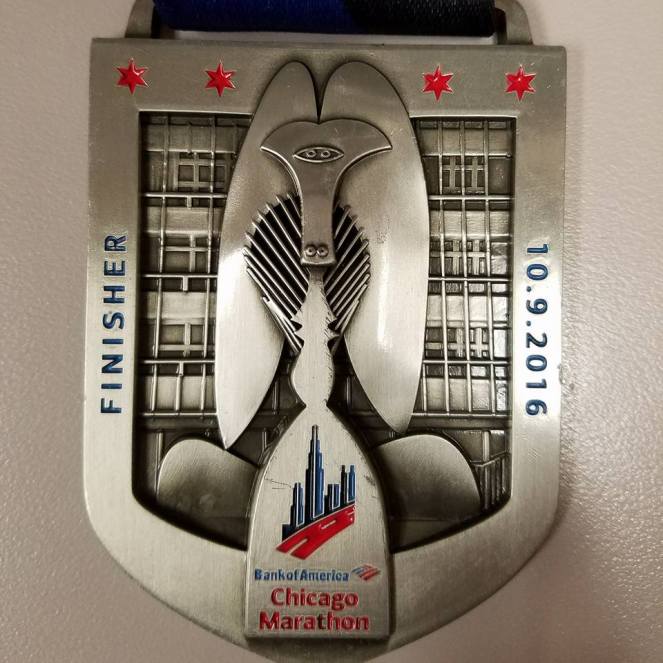 I’ve been wanting to blog about this all week, but I’ve been just a tad bit tired.  And so much happened on marathon weekend that I knew it would be a long post.

There’s so much to talk about that it’s going to take two posts to cover everything!  So strap on your seatbelts, here we go!  Recap time!

I arrived with my husband and youngest daughter in Chicago on Friday afternoon.  Our hotel was really nice, with a 24-hour market that had bagels, sandwiches, fruit, snacks, bottled water and Starbucks coffee.  There was also a very nice, casual restaurant that had vegan options when we were too tired to venture out into the city.  Our room was on the 21st floor and so we had a nice view of downtown.

My marathon running partner, Charlotte, and her husband were already at the hotel.  We had a drink in the lobby and before we set off for the expo, a friend of mine who I’ve known on Facebook for years happens to work right by the Hyatt, and so we finally got to meet in person!  Hey, there, Kelly!  It was great to meet you, although I feel like we’ve been old friends for a long time!

There were shuttle buses going to and from the expo, but the coordinator told us that it would be an hour and a half wait for the next shuttle because apparently the POTUS decided to visit Chicago and so a lot of the streets were closed off.  She said the expo location was only “2 miles away” and so we thought we might as well walk.

Charlotte and I picked up our race packets and since our family was running the 5k the next morning, they picked up their packets as well.  Here are some pics we took:

After the expo, it was getting late and we were all really tired from the “2 mile” walk, so we took a shuttle bus back to the hotel and ate at the hotel restaurant.  As I mentioned earlier, they had a couple of vegan options, so I decided to eat the pasta with veggies:

It was really good!  We all called it a night and went to our rooms to get some sleep because David, Kayla, and Kevin had to run a 5k the next morning!

Charlotte and I dropped our family off at the starting line and then hightailed it to the finish line, which we had a very hard time finding!  It’s my understanding that this is the first year that Chicago decided to have a 5k the weekend of the marathon and although David, Kayla, and Kevin really enjoyed the race, Charlotte and I felt that the race wasn’t very well organized for the spectators.  Access to the finish line was blocked off for security reasons, and so a bunch of us spectators were huddled along the fence trying to spot our loved ones coming down the stretch.  I did get to see David and Kayla run past, though, and they saw me as well!  In lieu of medals, they got really sweet hats:

After going back to the hotel and showering, we headed out for lunch at Native Foods.  Wow, I could do a whole blog post just on this place!  It was amazing!  Everything on the menu is vegan and I couldn’t decide what to eat!  I ended up with a coconut breaded avocado wrap, which was excellent, but I’m honestly kicking myself for not trying the jackfruit tacos.  Next time!  Everyone in our group loved their food, even the non-vegans.  I will definitely be eating here again!

After lunch, we headed to the Field Museum.  In hindsight, this might not have been the smartest thing to do, as we ended up doing LOTS of walking through the museum, as there are so many exhibits to see.  In fact, by the end of the day, my Garmin watch said that we walked 10 miles!  Oops, it was supposed to be a rest day.  Um……

The museum was very cool, though, and I’m glad I got to visit.  We headed back to the hotel, where I got everything ready for race day the next morning:

My daughter, Kayla, made me the tutu – isn’t it adorable?  I got the headband at the expo.

That’s it for now, kids!  Stay tuned, when I give a recap of the marathon.

Spoiler alert:  it was AWESOMENESS!

Adventures of a cyclist living in Lincoln City Oregon